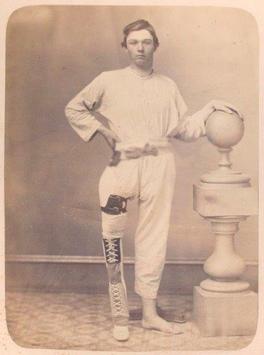 One hundred and fifty-two (152) years ago, Congress authorized the first government-provided prosthetics for disabled soldiers of the Union Army.

During the second year of the American Civil War, on July 16, 1862, Congress authorized $15,000 for the purchase of artificial limbs for soldiers and seamen disabled in service of the United States (Union forces), to be expended under direction of the War Department's Surgeon-General.

The following year, this benefit was expanded to include volunteer soldiers and, in 1866, a payment was added for veterans' transportation back and forth to obtain their prosthetics.

After the Civil War, there was an unprecedented number of war veterans with amputated limbs and many of them entered the new National Home for Disabled Volunteer Soldiers (VHA origins), established by Congress in 1865. By 1868, the Central Branch of the National Home (now known as Dayton VAMC) housed 1,249 disabled veterans of whom 114 had only one arm and 159 had only one leg. According to the annual report, "a greater number of one-armed and disabled men had never been assembled in a single institution before."

On June 17, 1870, Congress expanded the benefit to include replacement prosthetics every 5 years and gave veterans the option to take the monetary value, in lieu of a prosthetic. At the time, the value of an artificial leg was $75; an arm, foot, or apparatus for resection was valued at $50. Two weeks later, on June 30, 1870, the prosthetics benefit was extended to "all officers, soldiers, seamen, and marines disabled in the military or naval service of the United States."

Prosthetics have been a continuous part of U.S. veterans benefits since 1862 and, today, VA remains at the forefront of prosthetic development and technology to improve mobility and quality of life for the veterans who need them.