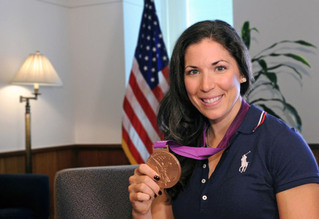 Introduced to rowing at the Pennsylvania State University, Natalie Dell O'Brien spent seven semesters on the university’s club rowing team. She began training at the elite level in 2007 and was invited to join the national team in 2010. After making the 2010 and 2011 World Championship teams in the Women’s Quadruple Sculls event, she was named to the Olympic team with her three teammates Adrienne, Megan and Kara. They became the first American crew to win a medal in their event (women's quad sculls without coxswain over 2,000 meters).

Happily retired from elite athletics, she now lives in San Francisco with her husband Conor and speaks to organizations about teamwork and the essence of success.  She has a Masters Degree in Public Health and is a social marketing strategist in the tech industry in Silicon Valley.

Rowing is not just a transformative and character-building sport for individuals, but it's also one that builds communities and friendships. I can't imagine where or who I would be without discovering the crew team in college. Most importantly, it's never too late to start.

"The rowing community is remarkably suited for new comers and this organization is a perfect place to get started. I can't think of a better hobby for Veterans and am honored to be a part of Veterans Rowing and Kayaking!"  - Natalie Dell